As a side note, after reading numerous posts against another individual on the site, who was simply offering information concerning a reputable Veterinarian Consultation service and Helen allowed the negative posts, I decided to leave Tanya's CRF Group.
The site may offer some good information, but when the owner of the group and its moderators refuse to post messages that simply go against their general "opinions", that is not a forum, but a dictatorship wherein divergent opinions are blocked.
I wish the best of luck to members of that group and
please check everything with your vet first regarding what may seem the most innocuous treatment.
In a few days, I will post the entire story of Sasha.
I owe it to his fighting spirit and for other pet owners whose cat may have CRF,
not to make the same mistakes I made when listening to opinions without consulting with another vet.
August 28, 2012 - 10:15 PM
Posted: August 28, 2012 - 11:00 AM
Since the moderators of Tanya's CRF Yahoo Group feel the below information on the absorption rate of Vitamin B12 (cobalamin) should be withheld from the group, I feel it is my responsibility to respond here. Moderation is one thing, but outright censorship when providing "proof", is quite another. The moderators are being referred to as "den mothers" by many on the group and I am beginning to wonder if the group is actually doing more harm than good. When common remedies are repeatedly posted and proved to be inaccurate, they go unnoticed. When actual proof is provided, the messages are blocked, censored or modified by the moderators. It certainly gives rise to the credibility of the group and its owners as a whole.

---------------------------
First message from moderators stating they will not post a fully researched response, because I sent the response privately to the person (Glenn) who requested "scientific proof", as well as to the group. It was sent privately to Glenn, because I am seeing a pattern of blocking posts that are not in line with the group owner's own way of thinking. What is truly disturbing is the fact that researched facts, that disprove the common theories held by the group, are undergoing censorship and complete blocking.

[S]ince you have also sent this privately to Glenn, we don't feel it needs also to go to the group.

We moderators are getting rather tired of the sniping on the list, with everybody having to be proved right and have the last word. We are all here to help one another, and at times lately it feels like the group is moving away from that.

I made the effort to make sure what I originally wrote in the thread was accurate and when asked for "scientific proof" by Glenn, I supplied that along with a response from an accredited veterinarian. I do not like being called a liar or that I am posting inaccurate information. By not posting my response, there is no verification to what I originally wrote and it appears as if I am avoiding Glenn's request.

Some of Glenn's posts are inaccurate, but when he is questioned, he snaps back like an angry dog instead of sorting things out. My post to the forum mentions nothing of my feelings, but accurately responds to his query, which is intended for everyone's benefit.

We are adults in an open forum and should be treated as such, not like children running to their mother because they had a disagreement.

Leah, it's nothing to do with being right. The group is also about being supportive, and everybody trying to have the last word is detracting from that. We are trying to find a balance re being accurate and being supportive.

With the high use of B12 in CRF felines, being supportive also includes posting accurate information when a particular commonly suggested remedy may not be helping.

This has nothing to do with Glenn, but helping others sort through the divergent opinions of the efficacy of B12.

Not only is oral B12 not absorbed properly, as stated by Dr. Steiner (a rather accomplished veterinarian researcher) below, oral B12 is "useless" in a B12 deficiency.

Common sense will dictate an injection that goes directly through the bloodstream and has no need to pass through the digestive system first, will have greater absorption rate.

To Whom it may concern:

After reading the informative paper, “Cobalamin: Diagnostic use and therapeutic considerations”, I was asked if there are any studies, verifiable research, papers, evidence of any sort that injectable B12 is superior to sub-lingual or oral dosing.

The opinions are so divergent and sorting through the hype from reality is virtually impossible for a lay person. The above paper was the closest clinical study for felines I could find, but the person with whom I shared it is still not satisfied.

Simply, is there an actual clinical study that shows a comparative rate of absorption for B12 when injected against taken orally?

Due to the physiology of absorption of cobalamin oral cobalamin is useless for the treatment of patients with cobalamin deficiency . I am sure there are some old studies that demonstrate this absorption physiology, but I would not know on top of my head what they are.

CLICKING THE BELOW IMAGE WILL TAKE YOU DIRECTLY TO THE
ALUMINUM HYDROXIDE DRUG INTERACTIONS PAGE SHOWN. 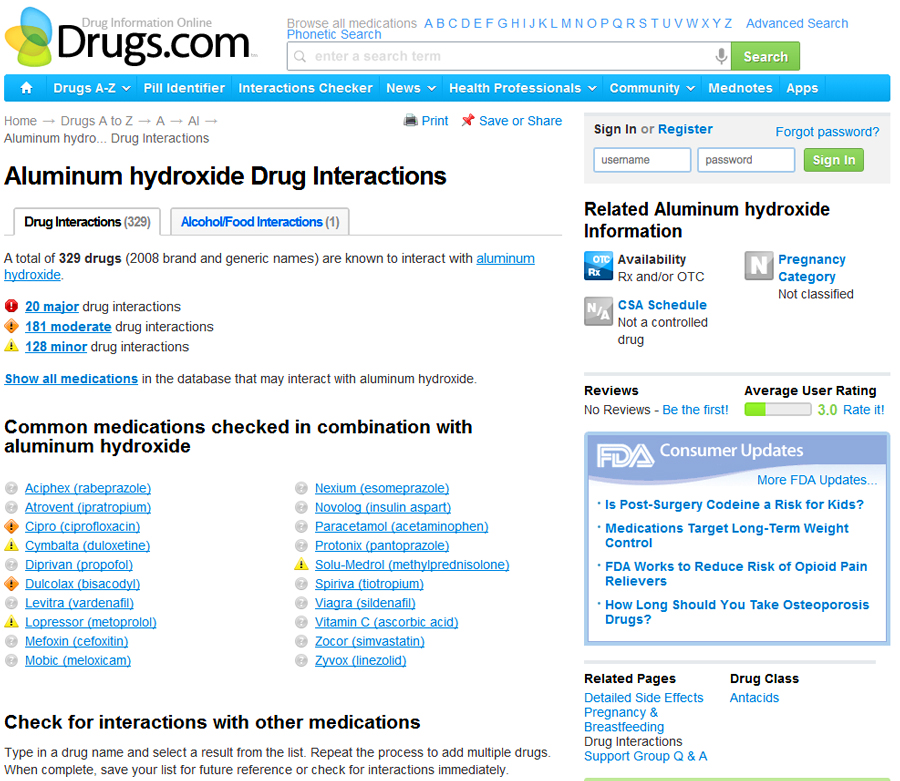